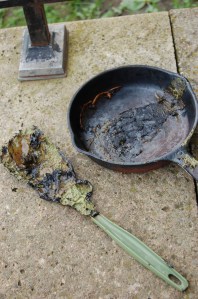 A quick question this morning:

Are the fumes from a melting plastic spatula harmful?

As in – should one evacuate the house if said spatula should happen to melt and fill the house with eye-watering noxious fumes?

Let’s just imagine that a housewife wakes up late, rushes to get her husband breakfast only to discover that all the metal spatulas are dirty and sitting in the dishwasher that didn’t get turned on the night before.

So she grabs a plastic one. As soon as the egg is flipped out on the plate, she puts the plastic spatula in the cast iron skillet and moves it to the back burner.

Then, after she hands her wonderful husband his lunch and kisses him goodbye, she decided to have a cup of hot tea.

So she fills the tea kettle and puts it on the front burner and turns it on.

While the water heats, she decides to check out Pinterest for a few minutes. A few minutes turns into several because Pinterest is so addicting…and the next thing she knows there is a nasty odor emanating from her kitchen.

She rushes in to discover that she accidentally turned on the back burner instead of the front burner and there is green plastic slime melted all over the cast iron skillet and a cloud of nasty fumes billowing through the house.

So – other than sitting the pan and melted plastic outside, opening all the windows in the house (despite the fact that it is 50 degrees and sprinkling) and offering the kids hot chocolate for breakfast to warm them up, what else should she do?

And how in the world does one get melted plastic out of a cast iron skillet?

I never liked that spatula anyway.