We had another little walk down memory lane last weekend as I met my siblings at mom and dad’s for our second annual sibling weekend. 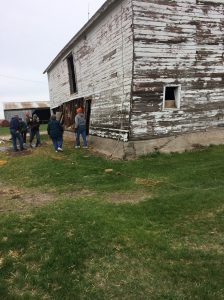 Rain and cold kept us from many of the outside projects that we had planned – but we braved the north wind for one last visit to grandpa’s barn – which is scheduled to come down this weekend.

It’s listing even more than last year – if that’s even possible.

We rescued barn doors and gates and wrestled off century old siding to be passed out among children and grandchildren and great grand children to be used in projects and flower gardens. 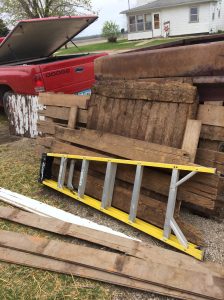 All the while sharing memories of our times at Grandpa’s farm. Laughing about the time grandpa paid us to paint the barn – and we painted the snouts of his curious pigs as they came sniffing around the side. Grandpa was not impressed. Or happy. And we were asked to not do it again!

The cold, rainy weather also gave us time to dig through some heritage boxes in the afternoon, meeting ancestors, hearing family legends and uncovering treasures.

Like my Grandma’s diary – giving a rare glimpse of her daily life as a farmer’s wife and mother. Seeing her through new eyes and appreciating her all the more. 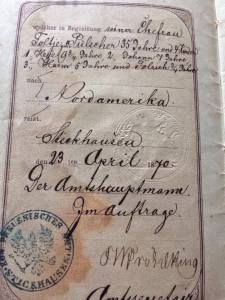 And my great, great Grandma Foltge Jurgena’s passport. She emigrated from Ostfriesland, Germany in the 1800’s with her husband and children.

We held in our hands a piece of history. Our history. And I wondered why they came? Was it hard to leave? How did they say good-bye to family? Pay for the trip? Start over in a new country with a new language?

But I’m so glad they did. Or I wouldn’t be here. Thank you Albert and Foltge.

We spent the evening as we did many times growing up – gathered around in the living room eating popcorn and watching family slides. 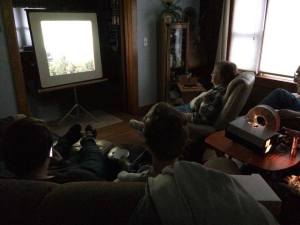 Laughing hysterically at our younger selves in all our awkward cuteness.

Reliving the joy and craziness of everyday life with five siblings, vivid imaginations, and an old farmstead for a playground. 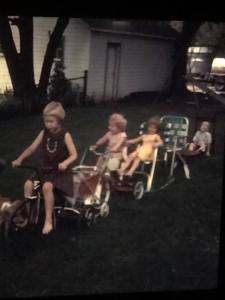 Glimpses of who were and how we lived.

We are truly blessed.

It was sibling weekend.

I spent time at my parent’s with just my four siblings (and 2 of our spouses, but only four of our many children).

Our official goal was to help mom and dad with a few projects.

Our unofficial goal was sibling time with mom and dad, sharing old memories and creating new ones.

The time was both relaxed and busy. 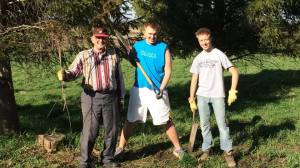 We scraped and painted.

We dug out old photo albums and remembered faces and places we hadn’t thought about in years. 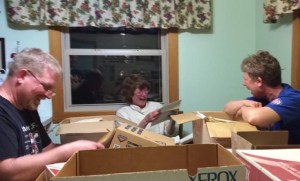 We looked through the boxes of school memories that Mom had saved for each of us.

And laughed till we cried at the things we found! 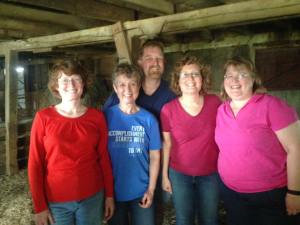 Before we went home, we took one more trip to grandpa’s barn to take some pictures before it is gone.

It’s bowed and leaning – but still full of memories.

And mice, and coons and probably rats and maybe even bats.

Some of us were brave enough to venture into the hay loft – hoping we were making enough noise to scare away any unwanted critters. 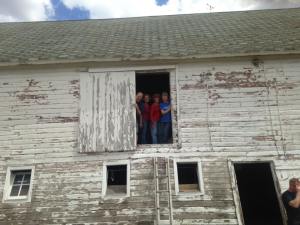 But few of us ventured up that ladder my uncle set out for us. My sister found a way up on the inside – climbing bales of straw and hoisting ourselves up.

My descent from the loft included a very ungraceful slide down those same bales.

I went home with straw in my britches and a head full of dust – but it was worth it to be a kid again for a few minutes with my siblings.

And really – that’s what the weekend was all about.

Going back in time remembering people and places and things that we share together.

One of my dad’s friends often says, “I would like to be able to go back and put my feet under my Dad’s table.”

And that’s just what we did.

For a few days one weekend in April, we put aside the cares and responsibilities of our adult lives, put our feet under Dad’s table and remembered.

Since I’m spending a few days in Michigan with my crazy wonderful friend Kimmer – I’m letting Buddy be my guest blogger today. Here is a composition he wrote for English class. The assignment was to compare and contrast two different things. He choose his sisters. We got a kick out of it and thought you might, too! 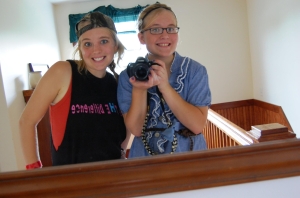 Dagmar likes guns and knifes, Angel Girl would rather shoot glue and paint a new project.

Though they’re different, they are also the same in many ways. Both are sweet, they’re sisters, and are awesome, both are female, and share a room. They both like to do things, and they’re both very blonde.

In the end, they are very different, yet very much the same, and the best part, they’re best friends. 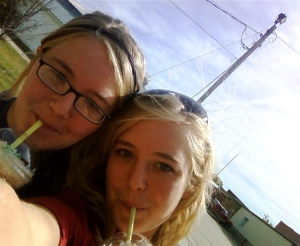 Yep. He nailed that one.  Good work Buddy.

Pedro wanted a haircut – but not just any haircut.

No – Pedro wanted a new ‘do. One that looked like this – 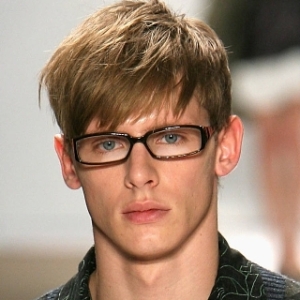 But he didn’t want to pay a professional.

I would have done it – but I couldn’t guarantee a “style”.  So he started bugging Dagmar to try it.

After several days of pressure – she finally caved. But she still wouldn’t pick up the scissors until he had  signed a waiver.

She actually made her brother sign a waiver before she would touch his hair.

This waiver hereby releases Dagmar from any legal, personal, or any other 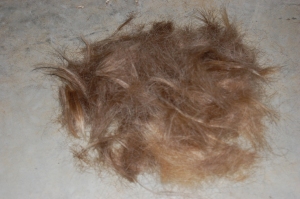 The pile of hair on the floor was a little scary.

But amazingly – his haircut was not!

He liked it. Dagmar liked it. Even mom liked it (You can actually see his ears!) His older brother liked it so much that he asked for one, too! 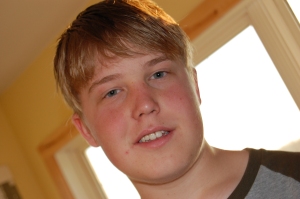 I’m thinking that if this keeps up she’ll soon be asking for more than a waiver – maybe some cold hard cash!

Our Christmas story this week is one from my childhood. It’s the one story my own kids loved to hear – about the time that Aunt Sandy, Uncle Tim and their mom almost got into trouble on Christmas Eve. 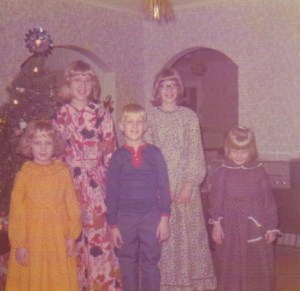 What child doesn’t love the excitement of Christmas Eve?!

Do you remember how hard it was to sleep after hanging your stockings?

Every year I would toss and turn in bed, trying to stay awake so that I could hear when those mysterious presents appeared under the tree.

I wasn’t the only one. My siblings were the same way.

One year in particular my brother, sister and I made an elaborate plan.

We would stay up until the presents appeared – and then we would sneak downstairs and check them out!

We lived in a big old farmhouse in rural Iowa. I was about 10 years old, which would make Sandy, 9 and Tim, 12.

We obediently went to bed when we were told and waited anxiously until all was quiet in the house. Then Sandy and I very quietly slipped out of bed and headed to Tim’s room at the top of the stairs.

He was waiting and ready with our secret stash of pilfered chocolate chips and dry Tang. We sat feasting in the light of our flashlights, trying not to giggle while we waited for the perfect time to make our foray downstairs.

When we were sure that everyone in the house was asleep – or maybe it was when we ran out of chocolate chips – we began our descent down the stairs.

Now remember – this is an older farm house and the stairs were pretty creaky. But my brother had been testing them for weeks. He knew exactly where each step creaked and had the pattern memorized so that we could sneak down those stairs without a sound.

Right side on the first step.

Middle on the second.

Back to the right on the third.

The fourth step is bad, skip it totally and go on to the left side of the fifth.

Step by step he silently led us down the stairs, my sister and I stepping exactly where he stepped.

We didn’t make a sound.

At the bottom of the stairs there were 2 doors. One opened into the living room with the tree and the stockings and all the gifts. The other opened into the newer addition which included a bathroom, utility room, and kitchen.

The three of us were in line. Tim, in the lead, noiselessly slipped through the first bathroom door like a hunter stalking his prey. I was close behind, followed by Sandy.

Now that we were in the newer part of the house the floors didn’t creak. We were close now! Our excitement surged and Tim picked up speed. He took the next bathroom door at a semi-run with me right at his heels. We had just about rounded the utility room when we heard the loud crash!

We looked back in horror to see Sandy in a heap on the floor – she had gone too fast and tripped on the bathroom rug!

It took a second for the reality of the situation to hit – we were out of bed at midnight on Christmas Eve with flashlights and the smell of pilfered chocolate chips on our breath!

And we had just made enough noise in the quiet house to wake the dead!

We turned tail and took the stairs three at a time. We jumped into bed, pulling the covers up over our heads.

Then, despite our excitement and all that extra sugar, we fell sound asleep.

Before we knew it – it was Christmas morning and we hadn’t been caught!

We ran down the stairs with sheepish expressions and saw all the gifts that had eluded us the night before.

As far as I can remember, that was our last Christmas Eve mission. We soon grew too old for those midnight raids, but it sure makes a fun memory!