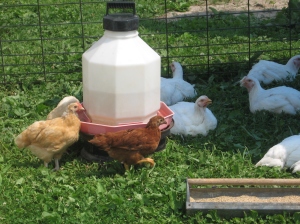 Remember our cute little peeps? Those little bundles of fluff have grown – a lot – and are now outside in a movable pen on grass.

The broilers are fat hunks of meat that are just a week away from the freezer and the layers are lively little buggers scratching and running all over.

They have done beautifully –  until Sunday night.

It was just another peaceful night in the country. We had the windows open to enjoy a light breeze when at midnight a ruckus in the pen woke me from a very sound sleep.  I then woke Jan and – being the good wife that I am – sent him out to investigate while I rolled over and went back to sleep. 🙂

He came in about 30 minutes later and reported a coon had run off from the chick’s pen but he didn’t get a shot at it. He said it was a little hard to hold both the gun and the flashlight – so if the coon comes back, I’d need to come out too.

Thankfully the rest of the night passed without a return visit.

The next night we were ready. We had reinforced the pens and went to sleep confident that they were coon proof. Ha!

My peaceful slumber ended at 3:30 when the entire pen exploded with noise – including the frantic cry of  a chick.

Now – at this point – I should have been prepared. I’ve seen enough Little House on the Prairie to know that I needed to sit up and proclaim, “Oh no, Charles, they’ve got Matilda, my best laying hen!”

My husband would jump out of bed, pull on his pants throwing his suspenders over his shoulder as he grabs the gun from the mantle and avenges my hen.

Instead – I jump out of bed, knock over Jan’s radio, run into the door, trip over my shoes and finally make it outside in my jammies with the flashlight.

Meanwhile, my husband pulls on his cowboy boots with his pajama shorts and heads out to grab the gun.

But we’re too late. Somehow that wily coon had attacked a poor defenseless layer through the fence. 😦

(Let’s interrupt this story for an object lesson – if that silly little chicken had stayed inside the plastic pen inside the fence she would still be alive today. How many times do we step out of God’s protection and do things our own way – only to get hurt!)

Okay – back to the chase.

We shine the flashlight all over – but can’t spot that varmint. Jan grabs the flashlight and heads off into the darkness.  It took just a few minutes before I realized that there I was – in the dark – in my jammies – with a blood thirsty coon on the loose.  I quickly ran after him and took back the flashlight.

We slowly circle the out-buildings – looking for the pesky critter.  It reminded me a little of playing Ghosts in the Graveyard when I was a kid – only the “ghost” hiding in the darkness was not a sibling, but a very alive and crafty coon.

After a thorough search of the area – we decided the coon was long gone – probably enjoying his chicken dinner and wouldn’t be back. So we went to bed.

Ha! It was 4:30 – just about the time that I had finally settled down and forgotten that there were such things as coons in the world – that the chicken pen exploded with frantic cries again.

We grab our shoes, the gun and the flashlight and rush to the pen. We see a fat old coon ambling off down the trail – but he’s too far away to get a shot. Grrr.

The next morning we surveyed the damage. All of the good little chickens who stayed inside the pen were safe, only one chick was lost.

Take that you pesky varmint!

It was wonderful to get a full night sleep’s – even if we did add an extra hour of work onto our day.

But this is just a temporary fix.

Somewhere out there is a crafty coon with a taste for young chicken and this farm ain’t big enough for the both of us.

Your days are numbered.

Just wait for round 3.