The one reason my kids go through the blood, sweat and tears to produce 4H projects can be summed up in four words – The Iowa State Fair.

Their goal is to get at least one project to advance to the State Fair so that Daddy has to take them. It worked again this year!

The first stop is always the 4H building – always. “Go directly to the 4H building, do not pass go, do not collect $200.” These are men on a mission – just follow the red shirt.

Once there –  we begin our treasure hunt to find our 6 projects in the midst of the thousands there.

We only found five of the six – but those five did well – 3 blues and 2 reds.

The missing project was Matt’s editing work on the grandkid’s video for my parent’s Golden Anniversary. One 4H staffer said they were playing the videos this year on TV screens for fair goers to see. Oh my – they will get an eyeful watching that video!  Some of his cousins might be just a little embarrassed…

Once we leave the 4H building – we’re on the livestock barns to see the biggest boar, the biggest bull and the avenue of breeds.  We pass a one-man band in route to the butter cow.

My favorite part of the fair – the free food samples! We ate quite a variety this year – brats, meatballs, cookies, popcorn, salsas, a wide assortment of dips, and even a whole hard-boiled egg at the egg producers booth.  If there’s free food – my kids will find it! 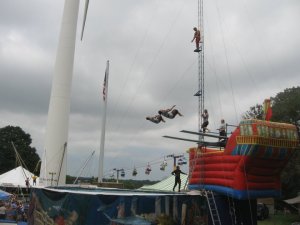 Speaking of food…we hiked up the hill to eat our sack lunch while watching the amazing Sinbad diving show. It was a seriously funny show featuring pirates and a cool monkey searching for the golden pineapple. Aarrgghh….my kids loved it!

They loved it so much that as soon as Sinbad announced that at the 6:00 show they would light “Cool Monkey” up in flames – they started lobbying to stay.

Even though they were exhausted from hiking from one end of the fair grounds to the other, wiped out from heat and humidity, nursing blisters and out of water, they still wanted to stay.

And who could blame them?! A flaming monkey is a pretty incredible way to end a great day at the State Fair!