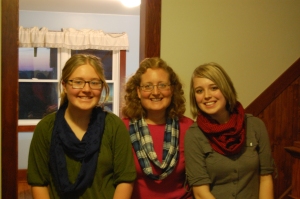 Let’s talk about scarves, shall we?

I’ve noticed that there are some people who have that certain flair with scarves. Honestly, I think they could tie a plastic garbage bag around their neck and it would look good.

I am not one of those people.

But every time I pick up a scarf my mind goes blank.

How do you tie this thing?

I’ve googled “how to tie a scarf”.

I’ve even had my daughters teach me everything they know.

Still – I don’t feel comfortable. Maybe it’s because when I do wear a scarf the girls take one look at my awkward attempts, sigh, and then reach over to fix it.

I recently discovered a quick and easy tutorial to make an infinity scarf.  It’s basically a long tube that you wrap around your neck.

Thinking this was surely something even I couldn’t mess up – I made one and ran up to model it for Angel Girl.

“See,” I demonstrate, “even I can do this! You wrap it once or twice.”

Then I wrap it once more.

“I can even wrap it three times!”

She frowns and shakes her head.

We knew that we had the potential for severe weather when we left for my niece’s graduation party yesterday. But we went anyway. Because that’s what you do when you have an amazing niece who does an awesome job and graduates and has a party and invites you. 🙂

We drove the four hours to the party in overcast skies and light rain. All afternoon at the party it was overcast and rainy.  It wasn’t until we were almost half-way home that the clouds started to look a little more ominous.

As we drove through some pretty heavy rain, Jan had me try to find some weather information on the radio.

Oh dear. There was a line of strong storms stretching across the state at an angle. Strong winds. Heavy rain. Hail. Even tornadoes.

We drove a little faster, ahead of the storm momentarily, but we could see it – massive clouds churning and moving.

An hour from home we start worrying about the chickens – 50 some broilers and a few layers that were in an outside pen. They had protection from the rain – but strong winds would destroy their pen in a matter of seconds.

We  drove even faster, watching the clouds darken, all the while formulating our plan to get those birds into safety before the storm hit.

As soon as we pulled into the yard – everyone would exit the van running. We would then all grab our boots and gloves and head to the chicken pen.

Buddy would grab the chicken tubs, Pedro and Jan the portable pens. Then Angel Girl and I would catch chickens, put them in the tubs and the guys would carry them to the pens in coop.

Great plan! We can do this!

As we drove down the gravel road I suddenly remembered that I was wearing my “Sunday best” clothes and would soon be wrangling chickens in a pen full of wet chicken droppings. This is not a good thing.

I removed all my jewelry and revised my plan to include a stop in the basement for a pair of coveralls.

Jan pulled in the driveway – with the clouds hanging overhead. He and the kids race towards the house. I  race, too, but a little slower as I realize that I’ve been in the car for 4 hours and really need to save my bladder before I can save even one chicken.

I’m just leaving the bathroom as the kids are already heading outside. Then – in a massive dash to catch up – I run to the basement and grab the first pair of coveralls I can find – a bright blue pair of my dad’s that say Jim on the pocket.

As I squeeze into them – I notice that one knee is out and material is a little thin. But there’s no time to change. I grab the only pair of boots I can find – and of course they haven’t been worn for some time and are covered with dust and spider webs. I can only imagine what’s inside each one.

It’s then that I remember that I’m barefoot – having worn sandals all day. But there is no time to be squeamish, I turn the boots upside down and shake them out – just praying that any spiders that may be inside are dead. Then push my bare feet into the boots, shuddering as I hear crunching.

I grab a pair of gloves – mismatched of course – and rush out to save the day.

To their credit, none of my children laughed (much) as I showed up in the chicken pen, bent over to grab a chicken and promptly ripped out the entire backside of the coveralls.

But I kept working – everybody did – and we saved all fifty some broilers and the handful of skittish layers as it started to drizzle.

There went my hair. So I’m wearing bright blue coveralls with a ripped out backside and Jim on the pocket,  rubber chore boots full of dead bug parts and a pair of mismatched gloves and now I have Bozo the clown hair.

But at least we saved the chickens.

I hope you at least got a chuckle out of it. 🙂

There’s a reason that farm wives like to live in the country.

Not only do we enjoy the peace and quiet of nature – but we also appreciate the fact that no one is around to see our fashion faux pas.

This fact became very clear to me recently while standing in the rain holding fence posts for my husband who was fixing the electric fence.

It wasn’t raining when we started – but it didn’t take long for the light drizzle to get heavier until soon my blue jeans were so wet that movement was difficult, especially on a wet and slippery hillside dotted with fresh cow pies.

Then my glasses got all steamed up and so covered with rain drops that I couldn’t see anything.

Which was good. Because I would have been mortified if I could see the damage the rain was doing to my head.

It wasn’t until later – when I was inside drying off  – that I glanced in a mirror and discovered what I really looked like.

The rain had totally soaked the top of my head, plastering the hair down, while the humidity in the air started frizzing the sides out until that hair was almost horizontal.

This unique look could only be described as Bozo the clown.

Not exactly my proudest fashion moment.

At least nobody saw me.

And I didn’t slip on a cow pie.

And I clean up good.

It’s all in a day’s work for a farm wife.