Have you ever had clipped a recipe (or bookmarked it on your computer) that really looked yummy – but it turned out to be a total dud?

It happened to me this week. I found a recipe for a blueberry baked oatmeal with no added fat that sounded promising and quite healthy. Angel girl helped me mix it up and we served it to our hungry crew at breakfast.

If I was expecting applause and smiles of appreciation – I was sorely disappointed.  It just didn’t taste that good.  At least they were polite – there were no sounds of gagging. 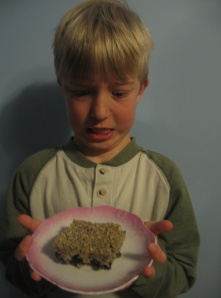 (Note to self – the butter in a traditional baked oatmeal is critical to the flavor of the final dish!)

I have since removed the link from my bookmarks – but I still have a half of a pan on the counter.

What do I do with it?

Part of me wants to feed it to the chickens – at least it will recycle into eggs. But I’m frugal enough to want to salvage something from it – I hate to waste precious blueberries!

In desperation – this morning I offered a treat from the candy bucket to any one who had a piece for breakfast.

What was I thinking? Bribing my kids with candy to eat a healthy breakfast?

Then I thought I would crumble it up and toast it to make a granola type topping to sprinkle on parfaits.

Yeah right – that didn’t work so well. Dagmar just walked in and asked what that mess was on the counter. Oops…at least that piece is going to the chickens.

<sigh> This one has me stumped.

My mom has had one of these massive kitchen fails  that has become a legend in our family folklore.

It was a regular run-of-the-mill evening meals. We had all gathered around the table and watched mom place a casserole in front of us.

The room was instantly quiet. For once in our lives all five of us were speechless.

We stared at that pan with looks of helpless horror. That was supper?

The top covered was covered in melted cheese – but under the cheese it looked suspiciously – green.

We all began to push the cheese around with our forks and discovered that it truly was green underneath – (gulp) and somewhat fishy. A few ventured to take small bites.

Words can not adequately describe the taste. Yes, there was some gagging. It was a canned salmon and spinach concoction with melted cheese on the top.

Mom thought it would be a good way to use up some things from the pantry – never dreaming that the spinach would turn the whole thing green. She had the best of intentions but it was still a massive cooking fail.

My dad finally put his fork down and asked her to please never make this recipe again. We kids all cheered and mom laughed.

She threw the recipe away and Dad popped popcorn.

I never learned what happened to the rest of that infamous casserole – but we never saw it again.

While the true name of the casserole is clothed in oblivion – we will forever remember it as “The Green Fish Loaf” – mom’s most famous cooking nightmare.

At least I come by it naturally.

Anyone care to try some blueberry baked oatmeal?

I’ve linked this post up with my friend Myra over at My Blessed Life for her Friday Fails Fun!