He was in Iowa stumping for my man for governor – Bob Vander Plaats. He was scheduled to speak at a rally in Council Bluffs – and we had volunteered to help.

But the day didn’t start out so well.

We had had epic storms the night before with a new storm coming through every 2 hours all night dumping more rain. By the time we woke up we had almost 6 inches in the rain gauge and could see flooding all around us.

But a little bit of rain wasn’t about to stop us – we were heading out to see Chuck Norris! 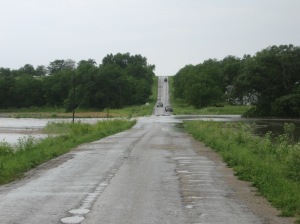 We had several detours trying to get around flooded roads. The trip became a mental game as we tried to remember where all the low bridges were and which roads were likely to be covered.

It was overcast and cool until we hit Council Bluffs.  Then the sun burst out from behind the clouds as if it knew that Chuck Norris was coming to town!

Then the heat and humidity started to climb. I could feel my hair frizzing.

We found the venue easily – almost by accident – and got to work. We put out signs, set up tables, and greeted people.

The excitement mounted as we saw the police escort pull in and the word spread that “Chuck Norris is in the building”.

A staffer pulled me aside and said I could slip my family back for a picture with Chuck and his wife if I wanted.

If I wanted?! Hmm…let me think about that…a family picture with Chuck and Gina Norris and Bob and Carla Vander Plaats?!

Oh yeah! We hurried back there as fast as we could before someone changed their mind!

We each got to personally meet the legend and his beautiful wife.

Really I  did – and my arm still works!

I think I said something really profound like “Wow – you’re Chuck Norris!” 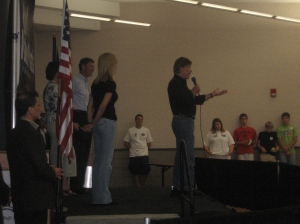 Then we were all posed together and had our picture taken by a professional photographer – my entire family dressed in Bob Vander Plaats for governor t-shirts, with my hair frizzed and my face red from the heat.

(I wish I could show you the picture – but it hasn’t been emailed to us yet!)

The rally went really well – people were very responsive to Bob’s speech and the place erupted when Chuck Norris took the stage! 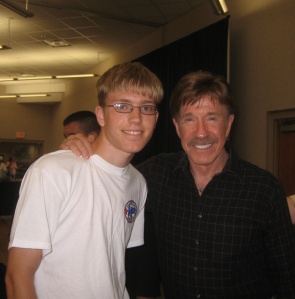 He stayed around after his talk and signed autographs until everyone had one. This guy is one class act! Seriously – Chuck and Gina are 2 of the nicest, most personable people I have ever had the privilege of meeting.

(That’s my son Matt with the legend himself!)

Meanwhile – I was passing out Vander Plaats for Governor yard signs like candy!

Later as the crowds dwindled and their car was leaving lot to catch their flight – Gina Norris saw my husband in the parking lot, rolled down her window and said, “You’re got some great kids!”

All seven of us were beaming as we got in the van to head home!

What a day it had been!