I love history and I love food, so I was thrilled to inherit the recipe files of my husband’s great Aunt Olive.

Since Aunt Olive and Uncle Torry had no children, many of their things passed to Jan’s parents, and some of those on to us.

As I sorted through the hundreds of recipes, I felt like I had stepped back in time! Vintage recipes that were clipped from newspapers offered everything from pie making tips from the “Lady of Rose Cottage” to prize winning molasses cookies that included hot mashed potatoes and raisins. (The prize was a princely sum of $5!)

Those yellowed and fragile clippings included practical house hold tips such as how to use kerosene to clean a copper vessel and how to quiet an alarm clock that is too loud. (You put a rubber band around the bell.) 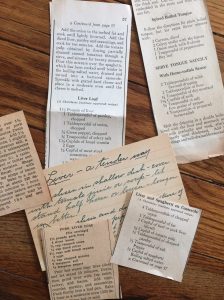 I discovered multiple recipes for organ meats – including beef liver, pork liver loaf, and even one for ” liver and spaghetti en casserole”.

But the one that really made me laugh was the one titled, “Serve Tongue Saucily” with a recipe for beef tongue and horseradish sauce.

I won’t be making any of those any time soon!

I will also not be making any of the varied and abundant recipes featuring prunes. These include prune pudding, prune cake, prune bread, prune whip, spiced prunes and even – I kid you not – a handwritten recipe for “Ice Box Prune Ice Cream”.

Then there are the family recipes: “Mother’s Plum Pudding” and a recipe for Grandma’s Cinnamon Rolls that needed 3 cards to get the details down.

The other 3 card recipe was for Swedish Kringla. That along with the various recipes for Lefse, coffee cake and ginger cookies showed Aunt Olive’s desire to keep her Scandinavian husband happy.

But the treasures I enjoyed most were the little glimpses of daily life that somehow got caught up in the recipes. Like the note and receipt from her favorite blueberry grower.

And most of all the little handwritten note from Olive to Torry simple saying “I’ve been called to a neighbor’s. Back soon, Olive.”

It must have been picked up with a recipe that was out and ended up in her massive collection.

Which now, years later, has become a reminder that these aren’t a random assortment of recipes; these were all collected by someone. Hand picked, chosen for some particular reason. They are a glimpse into Olive’s life, a snapshot of her culinary tastes, her lifestyle, her memories.

I wonder what future generations will think of my massive collection of recipes?

But one thing is for sure – they won’t find any for organ meats.