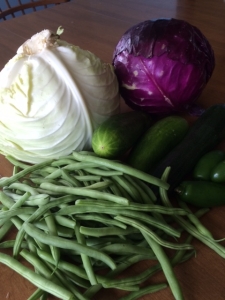 Just look at those veggies!

They would even more wonderful if I grew them.

After our early success with kale and lettuce – we have had one disappointment after another.

I’ve replanted tomatoes three times and the ones in the ground now are sitting in water after the heavy rain again over the weekend.

Bunnies got through our bunny-proof electric fence.

And the things that did manage to grow were choked out by weeds that grew fast and furious because of all the rain.

We mowed the garden three times and just last weekend took the weed-wacker to it.

At times I’ve been ready to give up.

…and I go out and pull some weeds and throw some more seeds in the ground.

Maybe we’ll have a late frost!

And hope springs eternal in the heart of a gardener.