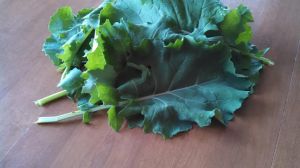 I think I have officially become the crazy garden lady.

This whole “let’s extend the garden season” has become a bit of an obsession.

One evening last week I realized while listening to the late news that the temperature could dip below freezing over night.

How had I missed this?

It was now after dark, Jan wasn’t home and my poor precious plants were ready to die a vicious death in the cold.

I had flashbacks of the poor tender seedlings I murdered in the spring.

I grabbed Buddy and we headed out into the pitch black night to rescue my broccoli and cabbages.

We couldn’t find a flashlight – so Buddy grabbed the little solar lamp by the workshop. And with its feeble light we slowly ventured out to the garden and attempted to cover the plants using tarps and bricks.

I only ran into the electric fence once.

At one point I thought, “This is crazy!”

You know those those plants have done nothing all week but stay alive? They haven’t grown or changed or produced huge heads. Nothing.

How’s that for gratitude?

There’s a deep freeze coming next week and I decided to let them go.

No more covering them.

No more worrying about them.

Well… except for those few kale plants and lettuce that Buddy and I put in a cold frame we made out cinder blocks and old windows.

I read somewhere that you could keep kale alive all winter…