Our van is broke.

Since it won’t start and it’s stuck in our driveway, Jan had to trailer it in to town.

(May I stop here and point out the fact that this is the third time in 18 months that we have had to tow this particular vehicle? Once on the way home from camping after rodents gnawed away some important wiring, once from Des Moines when the brakes locked up and now because it won’t start.

You may find this bit of history fascinating – but my husband did not.)

Towing the van into town meant he needed to borrow a trailer as the van is exactly 4.187643923 inches too big for ours.

So he borrowed Dagmar’s truck and the neighbor’s trailer.

This is when things got interesting.

The first time we towed this van we rented a car dolly.

The second time we towed this van we rented a trailer from U-haul that has a fancy come-along thing to pull the vehicle up on the trailer.

This time we have the neighbor’s flat bed trailer with no fancy come along thing.

Remember that the van won’t start.

He needed a plan.

So he and Buddy used the tractor to pull the van to the top of a small rise in the yard. Then he backed the trailer up to the rise, and they pushed the van down the slight incline to the trailer.

The plan worked well – at first. The van moved beautifully down the slight incline – but when it reached the trailer, there was a slight uphill to get it on the ramps.

And the van wouldn’t budge.

After several tries, they called for reinforcements.

And since both of our strong, handsome older boys are gone – there was only the two girls and me.

Imagine his reaction when two of the three of us showed up in flannel jammie pants wearing cowboy boots and flip flops! 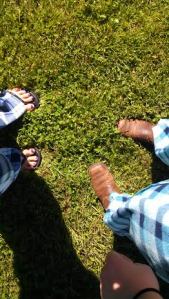 They shall remain nameless – but I can assure you that I wasn’t one of them.

But sometimes you have to to work with what you’ve got and we were drafted anyway. At least two of the three of us lift weights occasionally.  (Once again – I can assure you that I am not one of them!)

It took several tries but believe it or not – we did it.

We got that van loaded up and ready to go into town.

No fancy come along thing.

One thought on “Girl Power”