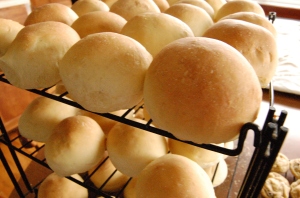 Buddy had to be up at 5:00 am to start making his yeast rolls for the State Fair.

That meant that I needed to be up a 5:00 am to make sure that Buddy was up to make his yeast rolls for the State Fair.

This is way too early to make anything.

I’ve always teased the kids when they work on 4H cooking projects that I want them to know it so well they could do it in their sleep.

Buddy mixed up the dough with one eye open, set it to rise and went back to sleep.

I, however, was now wide awake.

I got to sit and watch the dough rise and wake him up when it was ready to make out into buns.

it was at this point that things started to get a little hairy.

You see – my oven is broke. And one needs an oven in which to bake yeast rolls. Our solution – Grandma’s house.

And since Grandma was currently in Minnesota – her oven would be free.

So – Buddy made out the rolls, quickly got dressed, and ran out to do chores.

And it started to rain.

Meanwhile I slipped on my flip flops (this detail will be important later) and proceeded to gather up the trays of rising buns and head to the mini van. In the rain. Dodging the chickens who had just been released from the coop, in flip flops that were getting more and more wet.

I should note that we now have three kids driving – with three different vehicles – all of which were currently parked in my driveway directly in my route to the mini van which was – of course – parked the farthest from the house.

I somehow managed to get the first two trays in the van and ran to the house for the next two,  again dodging chickens and rain drops in wet flip flops.

Buddy finished chores and jumped in the van with me.

We were on a very tight time schedule so I went over the baking time with him again. And again. And one more time just in case.

I pulled the van as close to the Grandma’s house as we could, each of us grabbed two sheet trays of beautifully formed and rising yeast rolls and headed to the porch.

When I hit the door I realized that with a sheet pan in each of my hands – I couldn’t open it. Thinking quickly, I balanced one tray between my elbow and chin, using my free hand to open the door.

it was just as the door opened that my wet foot slipped in my wet flip flop causing me to hurtle through the door sending one sheet pan of perfectly formed and rising yeast rolls to go crashing to the ground.

Thankfully only four rolls actually landed on the ground, in the doorway, and on the porch. The rest stayed on the tray – but they were no longer perfectly formed. Nor were they rising.

I brushed off my dignity – chucked the four errant rolls into the ravine hoping some varmint coon would choke on them – and rearranged the remaining ones, praying that they would be okay.

Buddy got the rest of the trays successfully in the house and the oven preheating. I went over the baking time with him again – this time pointing to the clock for added emphasis.

Then I left my baby alone to bake his yeast rolls and I took my slippery wet flip flops home to clean up.

Buddy got them baked right on schedule and Angel Girl and I were right on time when we picked him up. Things were looking up!

But then I realized that I had forgotten to grab the paper plates we needed from the table – where I put them so that I wouldn’t forget them.

This meant that we had to stop back at the house.

Which made us late.

Now we needed to make tracks.

But Angel Girl was driving.

We made it to the extension office with 3 minutes to spare.

We handed off the precious yeast rolls to the county 4H coordinator who took them to the State Fair.

And there they were judged by a judge who knows nothing of the drama involved in getting them there!

Oh if those buns could talk!

3 thoughts on “The Tale of the 4H Yeast Rolls”