My garden – as our Amish neighbor’s would say – had “gotten away from us.”

I guess that’s no surprise considering a late frost – then lots of rain – and graduation – and then more rain and even some hail.

At least it’s planted – well most of it – thanks to my husband who added “help my frazzled wife plant the garden” to his endless list of projects this spring.

This week’s goal was to perform a garden search and rescue. Our mission – to find the vegetables and rescue them from the weeds.

The tomatoes and peppers were easy. They were well mulched and somewhat protected, so they are still looking good. We even have a blossom or two!

We discovered the first planting of corn and green beans – except for the last third of a row of beans that went AWOL.  Must have washed away. We replanted.

The peas were pretty entrenched in grass and weeds. When we finally freed them, they rewarded us with several blossoms.

The onions and radishes looked pretty good, when we finally found them. And we were able to salvage some of the lettuce, but the spinach was pretty beaten up by the hail. 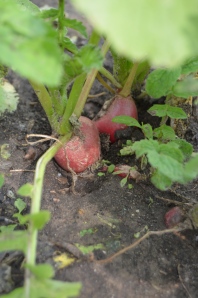 (Note – it doesn’t seem fair that the weeds right next to the spinach escaped hail damage – while the spinach plants were ripped to shreds. Just saying.)

But in all the hills of summer squash, spaghetti squash and zucchini that we planted just before graduation – there are only 4 plants.  The rest of the seeds must of washed away. They’re probably in Missouri by now.

And then there’s the 140 cabbage, broccoli, and cauliflower plants. 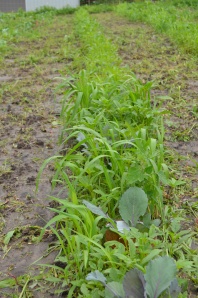 The poor things were mired in mud, beaten by hail, and over taken by weeds. They were in definite need of rescue.

It was a massive job.

A week full of muddy “character-building” hard work that our children should someday thank us for.

But we did it.

This mission is complete.

One thought on “A Garden Search and Rescue”