It was quite a week here.

Monday the girls and I went shopping. We found a new dress for me, bought the paper goods for the party and enough Hawaiian punch to sink a small ship.

Tuesday I bought all the butter on the shelf at the store and started baking.

Wednesday all of the kids took off on a one day road trip in Dagmar’s new truck to surprise my niece on her birthday. 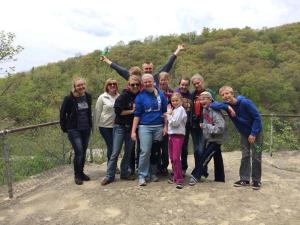 I stayed home and baked more cookies, plus I started roasting the first of many mock smoked turkeys.

But as the kids were ready to head home – Dagmar’s wonder truck wouldn’t start, leaving them stranded at my sister’s house.

As the phone calls and texts were flying back and forth between our stranded children and their parents,  my amazing husband tried to diagnose the problem from listening to the vehicle over the phone.

And he was right.

We decided it was best if they spent the night there and we’d figure out something in the morning before Pedro and Dagmar had to be back here for work.

Thus their quick one day jaunt became into an impromptu sleep-over.

They didn’t seem to mind and their party continued.

But in the confusion of the evening – we kind of forgot the poor plants that had been outside hardening off.

You know – those tomatoes and peppers that I had started months ago as wee little seeds and had been nurturing ever since.

We had a frost during the night.

Meanwhile – my sister was feeding a house full of unexpected guests who didn’t even bring their toothbrushes while finding a mechanic who could could replace a starter cheap and fast.

Then she figured out how to use their family van to tow the wonder truck into town to the super hero mechanic.

And me? I baked more cookies and roasted another turkey – this time with my shoes on and my purse ready in case a rescue party should be needed.

But it was not. The mechanic preformed a miracle. The kids made it home and Pedro to work with 2 minutes to spare.

Friday I baked my first batch of yeast rolls and roasted another turkey.

And today we fought the crowds at the Amish green house to replace our frozen peppers and tomatoes. Obviously we weren’t the only ones to miss the memo on the frost.

Yep. It’s been quite a week.