The Opening Ceremonies of any Olympic Games is traditionally a big deal here.

We study the foods of the country and design a meal to give us a flavor of the region.

But this year I will admit that Russia didn’t inspire me. It had been a busy week and I was ready to make a homemade pizza with pepperoni in the shape of the Olympic rings and call it a night. 🙂

He even researched. And when he uncovered a Zakuski – or Russian buffet – I decided we could pull this off. 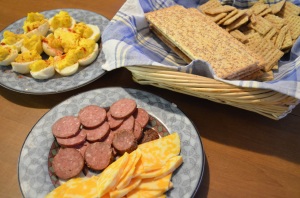 It looked somewhat similar to the Swedish smorgasbord we enjoy with Jan’s family at Christmas. We started out with deviled eggs, sausage, cheese, and crackers that we pretended were rye. So far so good.

Then we had Bitokes (meatballs) in sour cream sauce with potato dumplings. 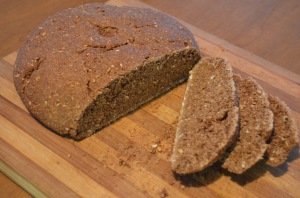 I even made Russian black bread. Which was actually brown. And didn’t contain any rye flour since I got sick on rye bread when I was pregnant with Matt 21 years ago and haven’t been able to look at it since.

Jan liked it. But then Jan likes everything. The kids weren’t as excited. They might have even spit it out. There’s still 5/6 of a loaf on the counter if you’d like to try it. Anybody?!

And then there was the Borscht. Honestly – could we have a Russian meal without this iconic food?

But I must confess – 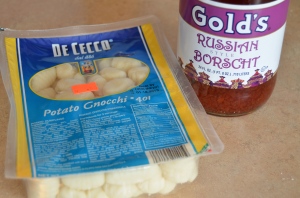 It came from a bottle.  And the potato dumplings were actually Italian gnocchi.

I’m afraid some Russian grandmother just rolled over in her grave.

While the Borscht could best be described as interesting. Think warm pickled beets.  Things got even worse when the bowl got around the table to Dagmar – our EMT. She took one look at the contents and exclaimed “Yuck! It looks like blood clots!”

And we lost our appetite and gave the rest to the pigs – who were much less squeamish.

For dessert we had Russian Tea cakes – which probably aren’t even Russian. But they sure did taste good.

While this may not have been the tastiest Opening Ceremony meal we’ve ever shared – but it sure was the most memorable!

2 thoughts on “Of Rye Bread and Borscht”