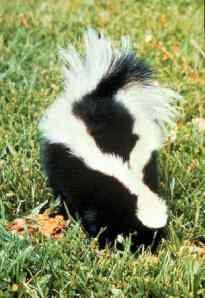 Our sleep was rudely interrupted the other night by the tear-inducing, horrific stench of fresh skunk spray.

My initial thought was that that skunk must have been  pretty close to the house and hoped that whatever animal he nailed would be long gone by morning.

But as we woke up it was impossible to miss the lingering skunk stench hanging in the air through-out the house. This smell was especially strong in the kitchen, down the basement stairs and in the basement laundry room.

Thankfully the morning passed quickly and we had a 4H activity for a good part of the afternoon that allowed us to leave the smelly house (with windows open in hopes of airing it out) for a while.

But – alas – we returned to an even stronger skunk smell.

It took Buddy to discover the cause. As he went out the side door on an errand, he happened to glance backwards and discovered a brownish stain all over the storm door.

Upon closer examination (yes – he actually smelled it!) – he verified it was definitely skunk spray.

It was a direct hit. Bull’s eye.

Whatever varmint animal provoked the skunk attack must have escaped unscathed while the storm door took the complete force of the assault.

But how does one clean skunk smell from a storm door?

A quick look at Google determined that a solution of hydrogen peroxide, baking soda and dish soap should work.

The only problem – the “recipe” called for 2 quarts of hydrogen peroxide and we had – maybe- a half of a cup in the bottom of the bottle.

Buddy bravely mixed that 1/2 cup with the soda and dish soap and scrubbed that door clean.

And- surprisingly – it helped! A lot! While there’s still a lingering nasty smell right near the door itself (possibly some spray on the wooden trim?) – it is definitely improved.

Because – of course – I have no intention of going after that smelly varmint himself.