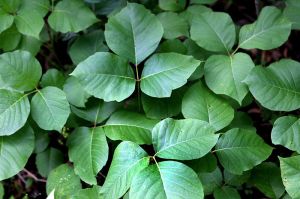 This wasn’t the post I had planned to write today…actually yesterday.  But sometimes things just don’t go as planned.

Angel Girl broke her glasses last week and she and I ended up driving the 45 minutes to the eye doctor to get a new pair.

Before we left in the morning I noticed a rash forming on my upper chest and a few spots on my legs.

Since I’m a little sensitive to the prickles on squash plants and I have been spending a lot of time in the patch squishing squash bugs, at first I thought it was just more squash rash. Itches for a few hours, is gone the next morning.

By 7:00 I knew I was going to the doctor just as soon as the clinic opened.

Some steroids and a prescription inch cream (the largest one they sell with 3 refills!) made things more endurable. Slightly.

But how in the world did I end up with poison ivy again? I have been so careful and hardly left the house. I’ve avoided all areas where the noxious weed is present.  And then I’ve faithfully washed with my poison ivy soap every time I’ve been out!

The answer was staring me in the face. The rash on my chest is in almost the exact outline of my work out shirt.

Every morning, I put on my work out clothes, gather the laundry and carry it to the basement, sort it, start it, and then exercise.

The guys have been in and out of poison ivy moving cows and pigs and fixing fence. There must of been some urushiol on their clothes that I unknowingly got all over my upper chest.

Then I worked out and sweated, which only made it worse, causing it to drip to other places, like all the way around my neck. (I knew I shouldn’t have done crunches!)

There must have been some on my shirt that I wiped on my face.

Then I showered, but didn’t use my poison ivy soap because I never knew I had been exposed.

So while I sit here in misery tonight, with the largest band of poison ivy rash I’ve ever had – covering my upper chest and wrapped around my neck like a boa, I’ve decided that the morale of this story is simple –

Don’t do laundry and don’t exercise.

At least not on the same day.

One thought on “Here We Go Again”