It was such a special weekend!

We were able to honor my niece Milly at a one-of-a kind vintage bridal shower, hosted by her two amazing and very creative sisters ! They captured Milly to a T!

The original plan was to have a vintage picnic underneath huge sweeping oak trees – but the excessive rain through-out the week left our beautiful picnic spot a swamp. So they moved everything inside. 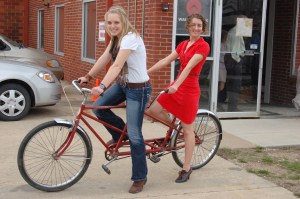 Well not quite everything. They did set up some games – like croquet, hoops, and badminton inside – but they left the vintage bicycle built for two outside where it was thoroughly enjoyed. (That’s my Dagmar in the front and my niece Millie – the blushing bride – in the back.)

Later – after many games and much visiting – we all moved into the “picnic area” where they had laid out quilts of all colors on the floor. Everyone found a seat as my mom, Milly’s Nana Shirley, gave a short devotional.

It was extra-special because my parents were also celebrating their 53rd wedding anniversary that weekend. 🙂

In the middle of each quilt, our hostesses had thoughtfully packed a picnic lunch in beautiful wicker baskets. It was so fun to open those baskets – just like opening a gift!

Inside there was plenty of food for a “blanket-ful” of guests, each item beautifully packaged to look vintage.

Squeals of delight were heard around the room as the guests unpacked their baskets and discovered the treasures inside.

There were ribbon sandwiches – each individually wrapped in waxed paper and tied with string, beautiful red apples, and bags of freshly popped popcorn.

The cream puffs with vanilla  filling that oozed out when you took a bite were a big hit on my quilt! As were the tiny meringues that melted in your mouth.

And – at the very bottom – we discovered paper bags filled with lemon drops and a vintage box packed with delightful little iced petite cakes – both vanilla and red velvet.

While we were feasting, our hostesses provided us with paper, colored pencils and books of poetry for inspiration. Then they encouraged us to write Milly a poem or draw her a picture – as Mil herself was known to do on picnics -or any other time.

Cream puffs with oozing vanilla filling proved to be very inspiring – and many blankets produced some hilarious poetry! (Mine included!)

The girls did such a lovely job!  Everything was beautiful and so well planned. I felt like I had walked into a page from an Anne of Green Gables book!

‘It has truly been a golden day,’ said Priscilla.”

Yes – it truly was a golden day!

5 thoughts on “A Vintage Bridal Shower”