We had a little drama around the supper table the other night.

Jan’s folks were here and after the meal his mom pulled out an article that she had found in her hometown newspaper.

She started reading about a man who had found a cannonball while doing some construction work in North Dakota. He brought the cannonball home and had it on display in his shop  for years. It was an interesting conversation piece.

I looked at Jan – he’s smiling rather smugly. Because you see – we have our very own cannonball. But we didn’t dig it up or anything. No – we got ours where we got most of our belongings – at a garage sale. If you look closely you can still the price tag.

But it was still a cannonball – and it was ours. 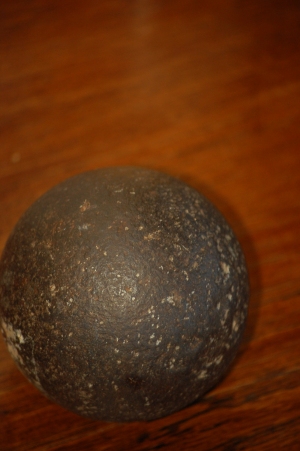 Jan’s mom continued reading – it seems the man passed this heirloom family cannonball on to his son, who displayed it in his welding shop. Again, it was a nice conversation piece.

Until a brother-in-law heard about it. This guy happened to be in the military equivalent of the bomb squad and had just spent years finding and destroying dangerous ammunition through-out the Northwest.

He informed this guy that the heirloom cannonball he inherited might be a loaded and very dangerous piece of military history and told him to look for a metal plate.

My eyebrow’s went up – as did those of the kids. Then we all looked at Jan. His smile was a little sheepish.

You could see the same questions in all of our faces. So is ours safe? Does it have a metal plate? Is it going to explode?

Jan’s mom continued reading – oblivious to the drama at the other end of the table.

The guy’s cannonball ended up being loaded and a bomb squad was called in to blow it up on a deserted road outside of town.

Only shards of the family heirloom remained.

Jan gulped. My eyebrows are huge as I look questioningly at my husband.

So do we have to call the bomb squad? Is it going to explode? How dare he buy a potentially dangerous cannonball!  Where is it anyway?

Jan’s mom finished off the article with the author’s speculation that the cannonball was probably used during the Indian Wars and that possibly General Custer had been involved.

Then confusion ensued as we revealed that we too have a cannonball and began asking the questions that we were pretty anxious to know. Namely – where was this cannonball and was it safe?

We finally decided that our cannonball was still in the old house having never been been moved over. So much for being a special heirloom.

We all waited anxiously at the table while Jan produced the cannonball in question – proving that it had no metal plate thus it was not in any way dangerous – just a heavy ball of solid metal.

He even went online to find pictures to prove his point.

Whew. Now that we knew that this ball of metal was in no way dangerous – the kids decided maybe it was time to move it over, and even give it it’s own story.

So they invented one… 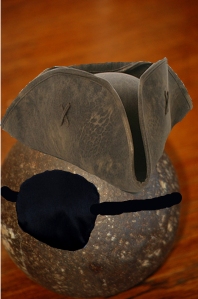 And since it obviously looks like a pirate cannon ball…

And since pirates aren’t very common in Iowa…

It’s obvious that this cannonball must be from the famous battle of the Middlefork River when Dread Pirate Roberts came inland and fought in the swamplands against evil King Humperdink for the hand of the lovely Princess Buttercup.

Okay,  so maybe General Custer and the Indian Wars may be a bit more believable!