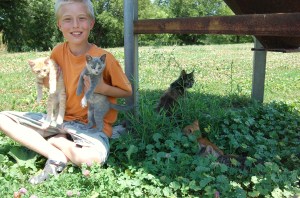 Earlier this spring I realized that our resident cat – Tiger – was getting up in years.

Since we haven’t seen any baby kitties around here for awhile – and Tiger might need some help keeping the mice down – I started asking around for some.

You know where this is going don’t you.

The first kitty arrived on graduation day – was named Loki and quickly claimed by Buddy.

The third kitty showed up the next day – was named Prim and quickly claimed by Buddy.

Does anyone see a pattern here?

Then this morning a friend dropped off a momma cat and 4 kitties while I was at the grocery store.

They were all quickly claimed by Buddy who is in his element trying out different names for them all.

Now I’m wondering just who else I might have mentioned this to?

Just be careful what you wish for.

(PS – I am no longer wishing for kitties – but I am still wishing for zucchini, cucumbers, summer squash and fresh tomatoes. Just saying.) 🙂

3 thoughts on “Be Careful What You Wish For”