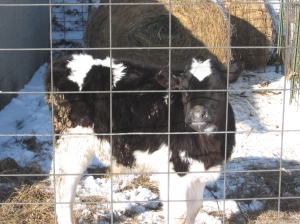 There’s a new kid on our block.

He has 4 legs, a cheesy smile and is black and white all over.

But don’t get attached. This little guy will end up being supper in a few months.

Because of that I started calling him “Hamburger”.

The kids weren’t impressed with that name – so I suggested T-bone. That didn’t fly either.

They reminded me of our last cow. We had named him Mud Puddle –  because – well – he just looked like a Mud Puddle!

The kids are sure that Mud Puddle took offense at his name and caused trouble just to get even. He would wait until we were all packed and in the car ready to head somewhere – and then he would get out of his pen and lead us on a merry chase.

I think he got out every holiday and every time we had company.

Believe me – he tasted really good.

Optimist. (And yes – I’m a little concerned about what this child will name my future grandchildren!)

The ideas got wilder and sillier until Jan finally said that we would just sleep on it.

That evening as we watching TV, I kept hearing the little guy mooing.  It sounded like it was right outside the window.

The little stinker had gotten out already. (For the record – Jan had the boys build the pen themselves.  After they got the little guy back in, they fixed the flaw in their construction!)

When they finally got him settled again – Matt suggested the name “Moo-dini”.

But there was something about his face that just didn’t look like a famous escape artist, or – for that matter –  an English writer that uses high brow words.

No – his expression looked more Barney Fife when he wanted Andy’s approval. You know the look – it says “Hey Ang – did I do good? Did I do good? Huh, huh? ”

Hmm… maybe he does look a little like a Barney.

Surely he wouldn’t object to that name?

You don’t think he’s ever seen the Andy Griffith Show – do you?