It’s raining, it’s pouring…  but this old woman is not snoring – she’s fretting and frustrated!

We have seriously had too much rain. The National Weather Service reported that we have had over 11 inches already in June. That averages out to almost an inch a day. Over 6 of those came at once on the infamous Chuck Norris Saturday – and we haven’t dried out since.

Your heart goes out to the farmers who should be finishing up their first cutting of hay and starting their second. 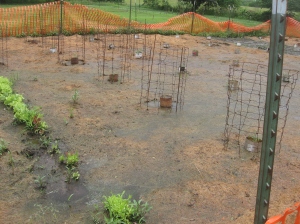 It also goes out to my poor garden. My tomatoes and peppers have been in for almost three weeks now and they are not growing. They look yellowed and forlorn. Shall we talk about my green beans?! They have also been in for 3 weeks. Only 4 seeds germinated. I guess I’ll replant for the third time. 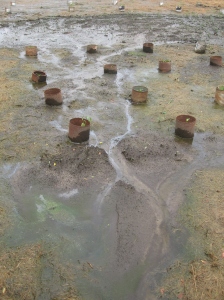 Don’t I have a lovely river running through it?!  I guess I shouldn’t complain – some farmers can almost float a bass boat in their fields. 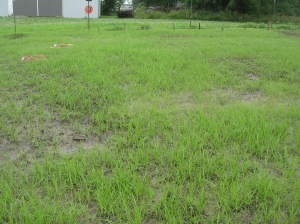 And here is my corn patch -overtaken by grass – it seems to like the wet weather. Trust me – there is corn growing in there – somewhere.

But all is not lost! There are still things to be thankful for. The cool wet weather has meant a longer and more abundant asparagus harvest and the red raspberries are just coming on now. We had our first wild black raspberry this week – and I see one lone blossom on one hearty pepper plant. 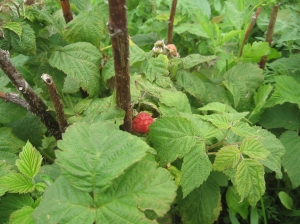 Let’s count some more blessings… the corn germinated pretty well and looks good (if we can just get the grass out of it!) The local Amish store had several nice watermelon and cantaloupe plants for sale that replaced everything the ones that didn’t come up from seed (which would be all of them!)

And the rain just stopped for today. The sun is out and the birds are singing.

If only this would last….