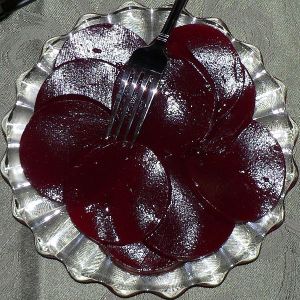 Our Thanksgiving was a little different this year – instead of a quiet meal at home, we volunteered to help serve a community meal at our church for anyone who – like us – didn’t have family close by.

We had never done anything like this before – and no one had any idea how many people would show up and how much food to make.

Somethings we were right on – like the dressing and the sweet potatoes.

Somethings we weren’t even close.

But all of the left-overs found good homes, many of them ending up here.

The turkey and ham turned into casseroles that now live in my freezer. The mashed potatoes became the most amazingly delicious lefse ever made! The relishes have been eaten on all week.

The only thing that truly stumped me was the left-over cranberry sauce.  It wasn’t the yummy homemade stuff or even the stuff with the real cranberries in it. It was the stuff from the can – the jellied stuff. You know the kind – with the ridges from the can on the outside.

I like it, but not 4 cans worth, cut and partially melted in a ziplock bag. I will admit that this frugal momma almost tossed it to the chickens.

I had an inspiration – an “aha” moment.

I decided to turn it into salad.  I would replace the pears in our classic blender jello recipe with the cranberries.  Brilliant!

2 (3-ounce)  packages of Jello (I used strawberry but orange would be yummy as well!)
4 ounces cream cheese
1 can jellied cranberry sauce (or whatever is left-over in the zip-lock bag after the holidays!)
1 1/2 cup boiling water

Mix all ingredients together in blender on high. Pour into a serving bowl and refrigerate until set.

I frosted ours with Cool Whip since we had some of that left-over as well.