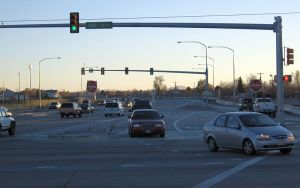 The hubby and I loaded up our passel of young’uns and headed for the big city the other day.

Ya’ll know the big city? It’s the one with traffic lights and more lanes of traffic than I have lines on my clothesline.

We aren’t like most folks who head right to the mall when they hit town. No – we drove right on past it and stopped at Goodwill. Figured some other silly person can pay full price, wear it 6 months and donate it. Then we’d buy it for a few bucks.

We also hit the DAV and came away with real nice camo jackets for the whole crew, even found camo hats for a few of them.  We’ll be styling this fall!

Then we headed off to find us some vittles. There were lots of fancy eating places – but we kept driving until we saw Arby’s . The sign said 5 regular roast beef sandwiches for just $5. Now that’s our idea of good eating!

After a stop at the Arctic Cat dealer and a scenic drive we finished our day at Sam’s Club were we had a mid-afternoon snack of free samples.

And that’s what happens when the country folk hit the big city – some might call us cheap, but I think it’s just frugal family fun.