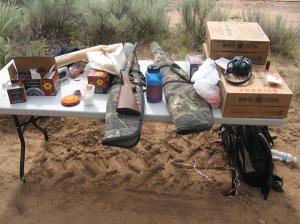 My oldest son and oldest daughter recently spent a week at Teen Pact Survival Camp in the mountains of New Mexico.

This was one non-stop, action packed, and amazing week!

It was a week in the wilderness filled with many new experiences.

My daughter Dagmar told about her adventures on the shooting range.

Now Dagmar really has had no experience with firearms – unless you count her brother’s B.B. gun or playing around with the super soakers.

She was more than a little intimidated by the rather large and heavy 12 gauge shot gun she was given – but willing to give it a try.

The clay pigeons were fired off and her first shots fell quite short.

The leader was watching her and kept giving her words of encouragement.

“That shot was closer than the last one!”

And finally “You’ll hit the next clay pigeon!”

Dagmar responded, “What clay pigeon – I was aiming for the tree!”

When I finally stopped laughing – I saw the life illustration she made.

How often in life do we aim for the easy target – the big one that doesn’t move.

And how often do we miss the clay pigeons in life – the seemingly impossible goals, the big ideas, the hard things – because they are too big, too impossible, too hard.

But I serve a really big God.

He can do really BIG things.

He can do really hard things.

He can even do the impossible.

When He throws a clay pigeon with my name on it – I pray that my aim would be true and my faith would be strong enough to pull that trigger and take down a giant.

Matthew 19:26 “But Jesus looked at them and said, “With man this is impossible, but with God all things are possible.”

One thought on “What are You Aiming For?”