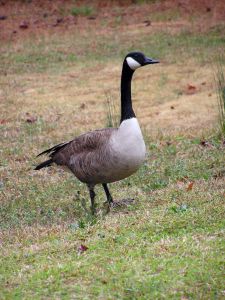 We have just two Canadian Geese couples nesting this year, one couple on Finger Lake and one on Our Pond. (I know that’s not a very original name, but that’s what we called it until we came up with a better one, and I’m afraid it stuck.)

Usually by this time of the year we’ve had several run-ins with Daddy geese who tend to take over the property, but this year it’s been pretty quiet.

They can be very territorial when the Mamas are nesting and after being chased a few times, we have learned to give them a wide berth.

I did run into Papa Goose on the dam while taking a walk one evening, but he waddled out of the way quickly while loudly sounding the alarm.

A few days later I was able to sit on the dock at Finger Lake and watch one of the couples swimming around the pond for several minutes before the mama climbed back in the nest box. Beautiful!

Then just last night the boys ran into a Papa Goose right on the lawn by the house. It is rare to have them so close, and a little uncomfortable. They watched him graze for a few minutes and then carefully walked around him into the house.

It’s a blessing to be so close to a wild creature like this and be able to observe it’s habits, to hear the whooshing of its wings as they fly low over our head, and to watch it land gracefully on the pond.

Just one more thing to be thankful for here in the country.